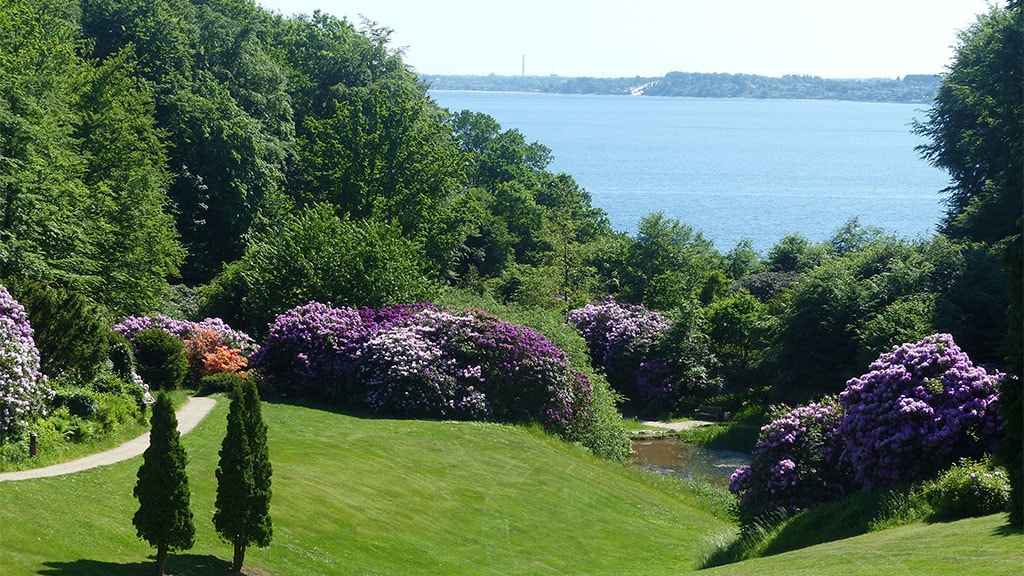 The Treatment paths at the old sanatorium

At the beautiful Hotel Vejlefjord you will find these historic hiking routes in impressive nature. Go for a walk in hilly landscape through the beautiful park, the deep forest and along Vejle Fjord with lots of little curiosities en route.

Go for a historic hike

Fresh air and excercise were important elements in the treatment of tuberculosis patients, and hence the tuberculosis sanatorium was made in the very hilly landscape straight down to Vejle Fjord. The patients could get the right combination of fresh air and exercise through systematically ordained walks on the paths in the area.

The paths are in this day and age used by the guests of the hotel and the locals in the area for walks and excercise. The Park is public, so everyone is welcome to go here and enjoy the beautiful nature.

There are a total of four waymarked hiking routes between 1,5 and 2,4 kilometres long. The routes lead through beautiful landscape in Grund Forest, the beautiful park and at the shore of Vejle Fjord.

Along the paths, there are several historical attractions, great and small, but all a part of the history of Vejle Fjord.

Furthermore, there are more than 20 wooden benches with inspiring quotes on them.

The park below the stunning hotel is a wonderful sight. Gardened by the hotel's skilled gardeners, the park slopes gently to the fjord and the bathing jetty covered in beautiful colours.

The plants in the park are continously taken care of, so the guests get an experience of lushness all year round. In the spring, thousands of spring flowers lights up around the buildings. And in May/July the old Rhodondendrons blossom in many colors.

Scattered around the gardens are a training court, sitting areas and cosy corners.

Try climbing the spiral shaped snail hill, which was used in the past to assess whether patients at the sanatorium were ready to be discharged.

The history of the treatment paths

On the 1st of March in year 1900 the sanatorium opened. Vejle Fjord sanatorium was the first tuberculosis sanatorium in Denmark, and the beautiful location far from the noise from the city was ideal.

Saugman created a net of paths with varying difficulty, so that the patients could work out systematically. The park was created at the same time in a romantic landly style with rhodondendrons, bridges, creeks and lakes right down to the Fjord.

Fresh air, excercise and rest were the three pillars in the therapy, that Chr. Saugman ordained his patients. They had to gain strength on the easy paths and later on the more difficult ones.

Already from the opening the paths measured 12 kilometers in total and were soon extended to 20 kilometers. These paths still exist today.

Enjoy a meal at the brasserie

After a days hike in the area, you deserve something good. At Hotel Vejlefjords restaurant you can enjoy delicious a la carte dishes. Buffet is often offered for lunch with a mix of tasty cold and warm dishes.

In the area around Juelsminde there are several great hiking routes. Find inspiration for your next trip here.