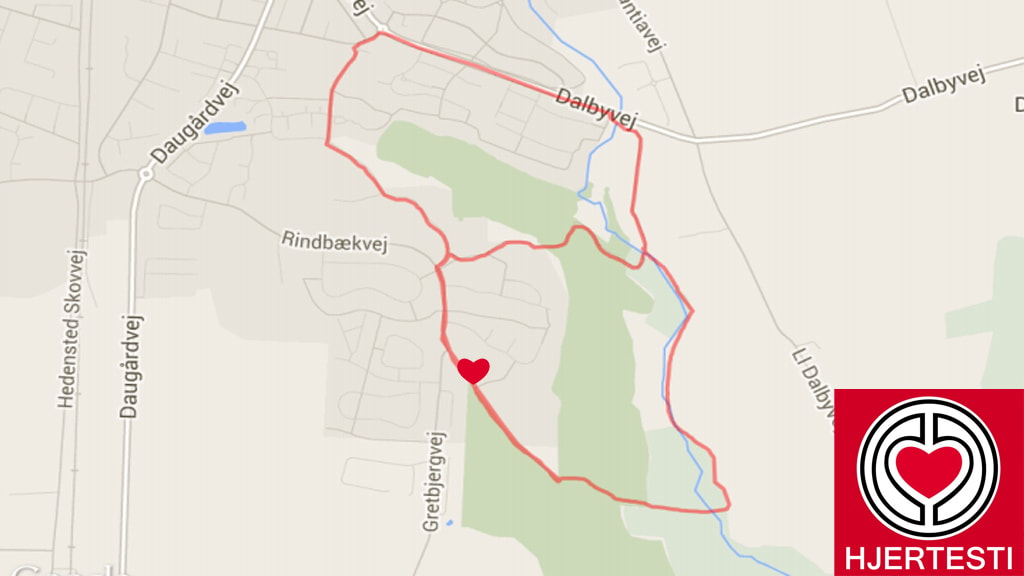 Lovely waymarked hiking route in the southeastern part of Hedensted. The route goes through the nature area Torup Hills, Gritbjerg Forest, Hedensted Golf Club and a new quarter in Hedensted.

The landscape is very characteristic on this short roundtrip in the outskirts of Hedensted. The raw and free nature at the valley along Torup Stream, combined with the polished nature of the local golf club and a new modern quarter creates a unique setting for your trek. The relatively short route is perfect if you want to get some exercise on a busy weekday, when you want to take the dog for a walk or when you need some fresh air on a short Sunday walk.

A walk on the heart path is between 3,5 and 5 kilometres long. From Dalbyvej at the northern part of the route there is a path leading south through Torup Hills along Torup Stream. While walking south you pass a very large rock. According to legend, the boulder was thrown by an angry witch from Stouby wh was angry that Hedensted Church was built. On the southern part of the route, you turn west through forest to Hedensted Golf Club. From here you head back north towards Dalbyvej through the residential area on the roads Rindbækvej, Torupvej and Præstemarken. This roundtrip is approximately four kilometres long.

Midway between the northern and southern tip of the route, there is a path leading east/west through the golf course. This path makes it possible to make the route both shorter and longer. For example, if you do not want to walk near the trafficked road on Dalbyvej, you can skip this part. This path starts in the west where Torupvej meets Rindbækvej and in the east where the path crosses the stream.

Heart paths are waymarked hiking routes that make it easy for you to get exercise on busy weekdays. The routes are typically placed in the cities where people live. The heart paths can be found all over Denmark.

The nearest heart paths are in Horsens, Juelsminde and Tørring.

The Hedensted Lakes is a new recreation area where you can go for wonderful walks around the area’s seven lakes. If you walk around all the lakes, the trip will be four kilometres long. We also suggest the three-kilometre-long waymarked roundtrip through Sebberup Forest.