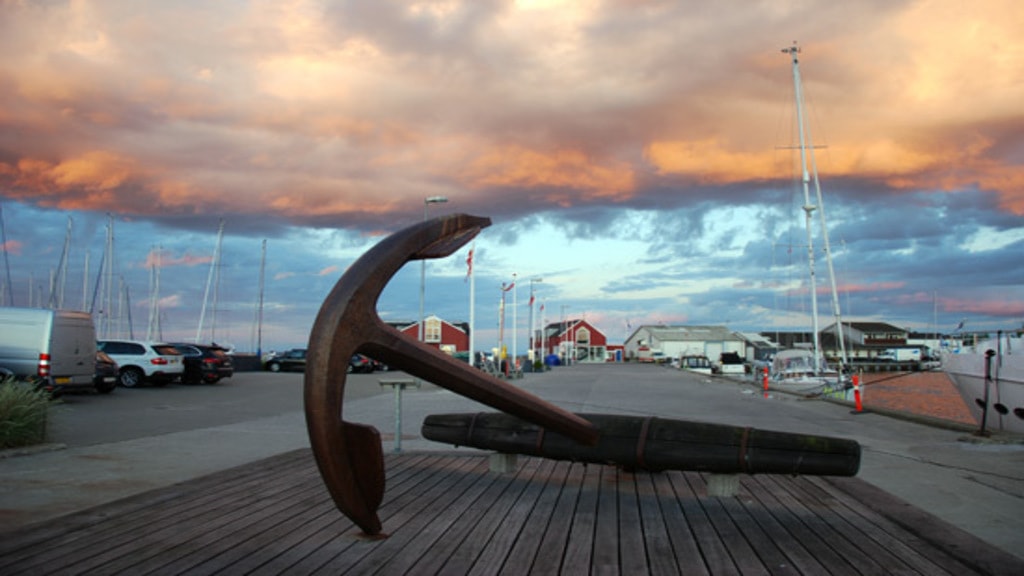 The anchor from the frigate Jutland

The great anchor from the frigate Jutland is the landmark of Juelsminde, and after having been placed at the entrance to Juelsminde, it was in 2011 moved to the pier at Juelsminde harbor. From its current placement it can be seen from Sandbjerg Cove where the frigate was anchored from 1912 to 1925.

The frigate Jutland was built at Holmen in Copenhagen in 1860. It was with its long and slim hull the fastest ship in the fleet, heavily armed and maneuvereable.

In 1864 the frigate Jutland was part of the battle of Helholand along with the frigate Niels Juel and the the corvette Heimdal. During the 2 hour long battle 611 shots were fired from the frigattes 40 cannons and in the end the enemy, the austrian and preussian ships fleed to neutral waters.

However, two energetic men, fishing inspector Christian Løfting and ingeneer Carl Holtermann, succeeded in saving the frigate and in 1912 Christian Løfting seeks out Manor owner Schou from Palsgaard. He had heard that Schou had a national awareness and also was pretty generous.

Christian Løfting proposed his business in the hope of getting a contribution for the good cause.

Ejnar Schou told him to wait while he went into the room next door to speak to his wife. When he returned 10 minutes later he exclaimed: ”We’ll buy the ship”.

The frigate anchored in Sandbjerg Cove and became a large tourist attraction.

During its stay in Juelsminde, the frigate Jutland was used as a radiotelegraph station for the telegraph school in Svendborg. There was daily contact with the sender in the Eiffel Tower in Paris, and when the clock hit 12 noon, Captain Christensen fired a salute cannon. That way all of Bjerre Shire could set their clocks accordingly.

Cannon accolade from the frigate Jutland seen from the pier.

In 1914, manor owner Schou held a memorial party (50 years) for the battle of Helgoland. He invited all veterans who had been part of the battle as guests on the frigate, hired the musicians of the guard and paid for lunch onboard the ship and dinner at night at Færgekroen. 254 veterans participated.

One winter, the frigate froze stuck in the ice and at thaw, it went with the ice out of the bay and lost one anchor – the greatest one. It was later found by a fisherman and brought to shore at the great pier.

The anchor brought to the pier – drawing by Søren Knudsen 1923

As the memorial park for Ejnar Viggo Schou was opened in 1933, the anchor was moved to the corner of Odelsgade and Ejnar Schous Allé. In 2011 it was moved back to the pier.

After the passing of Ejnar Schous død in 1925, the marine ministry bought the frigate for scrap. But yet again there was a will to keep it and the following years 400.000 dkk were collected. The frigate was restored and the government agreed to maintain the frigate for 50 years.

For several generations of kids from the provinces, the mandatory school trips to Copenhagen included a stay at the frigate Jutland. In 1936 – 1959 approximately 200.000 schollkids spent a night on the ship.

In 1960, the battered frigate came to Ebeltoft, but it wasn’t restored until 1989 where it received economical help from Mærsk McKinney Møller and a nationwide collection.

In 1994, the restored frigate was inaugurated.